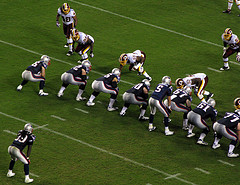 There are plenty of folks out there, that have already picked the New England Patriots to win Super Bowl XLV.  I for one am not so sure about that, and even though it may seem like a done deal, there are a few pretty good reasons why this won’t be the Pat’s year to celebrate in North Texas.  One of those reasons is consistency.  The Patriots have been beaten pretty good a few times this year, and it shows, that they’re not as invincible as some would have you believe.  The BetUS superbowl predictionfolks I think would agree with me. Their fans would argue of course, that good teams always find a way to win the big games, even if they play inconsistently throughout a season.  I however disagree.

I’m a firm believer in the mantra, that big NFL games are won on defense.  Football is war, and it’s not just about scoring the big plays and points when you get the chance.  It’s also about choking your opponents arsenal.  Keeping the other team at bay, not only makes things easier for your offensive unit, but can mentally demoralize your opponent on every level.  Once a team get’s frustrated, they start to take chances, and usually end up losing big.  The Patriots defense is an Achilles heel for the team.  Their defense is currently ranked 30th overall.

And, last but not least, some of the teams New England is likely to face down the line are simply more complete and balanced teams.  The Ravens, Steelers and Jets are all more then capable of taking New England out of the playoffs.  And, I believe one of them probably will.